The project will focus on the off-shore, pelagic waters of the HUS and coastal bays influenced by offshore processes (Fig 2, dark blue and turquoise areas). Additional stakeholder surveys for the ecotourism sector will be carried out on Galapagos (dashed light blue on Fig. 2). The project will also closely interact with other research projects and initiatives of the proponents in the region. 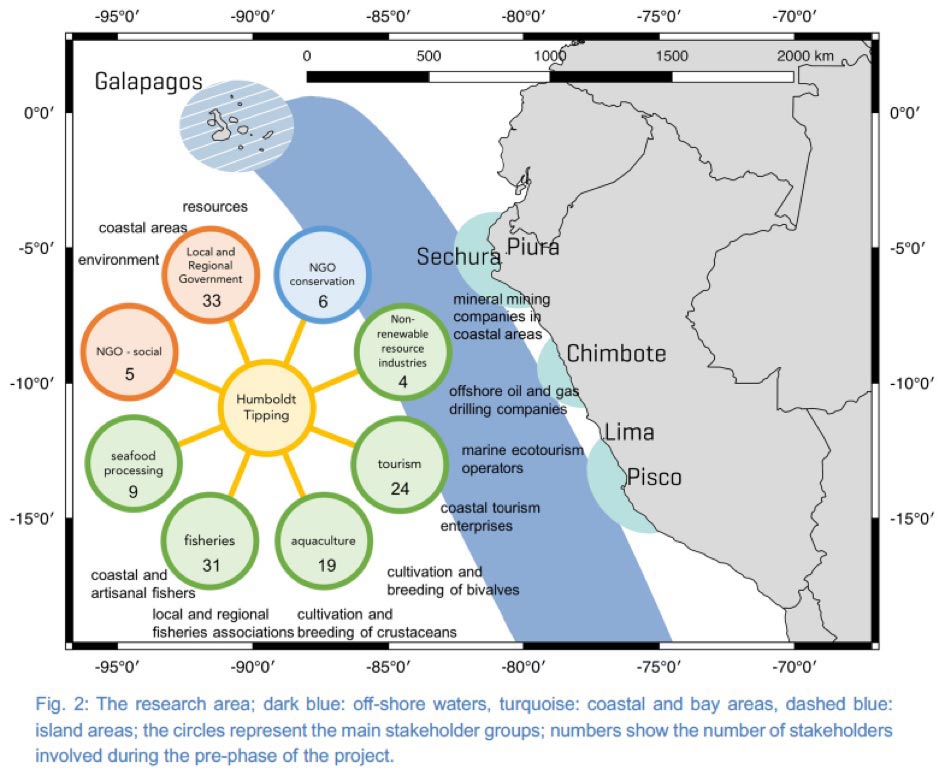 Within the WP 5 two biogeographical region were chosen; Piura/Sechura Bay (5.6°S) and Pisco/Independence Bay (14°S; central-south upwelling zone). While the region of Pisco is located in the central-southern part of the country, exposed to the continuous upwelling of the Humboldt Upwelling System (HUS), the region of Sechura is positioned at the transition zone between the tropical northern and the central upwelling region In the WP 7 workshops, interviews and surveys will be conducted in the case study localities Piura, Chimbote and Pisco and on Galapagos. In Piura and Pisco, workshops will focus on benthic invertebrates, demersal fish resources and species relevant for tourism, and in Callao (Lima) and Chimbote, on pelagic fisheries. A workshop centered around the vulnerability of the ecotourism sector to El Niño and climate change impacts will be held on Galapagos (together with WP 5 and 6).

Information base of the research area:

Artisanal fisheries are widely distributed along the Peruvian coast, with marked local differences in target species and vessel types, and high relative socio-economic importance in the regions of Piura (port of Paita) and Ica (Pisco). National and international beach and surf tourism, and ecotourism are especially important along the north coast of the Piura region, the central-northern coast and around Paracas. Ecotourism focused on penguins and sea lions in the national reserve are popular in Paracas, while tours to watch sea turtles or whales, on artisanal fishing boats (catch-and-release sport fishing) and to visit mangroves are growing in importance for many small communities along the north coast. On the Galapagos Islands, ecotourism is the dominant provider of income and livelihoods, but while some fishers have transitioned to sport fishing and snorkeling tourism, political conflicts between artisanal fishers and tourism have surfaced after further expansion of the marine reserve. Along the central Peruvian coast, a further sector of cultural value is the traditional seabird guano production on offshore islands, e.g. the Ballestas Islands (Paracas).